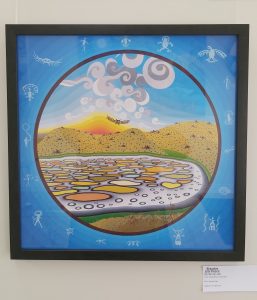 David Wilson Sookinakin is a renowned First Nations artist from the Okanagan Nation. As a child, David looked for his own Nation’s art forms, but could only find a few pictographs. After discovering a book of local pictographs in the public library, he studied it extensively and went on to develop his own style of
art from this.  “I create First Nations Art using ancient pictographs of my Ancestors to create a contemporary and new First Nations Art Form.” His expressive paintings are created on large canvases measuring 4 – 5 feet. Other mediums include drums and printmaking.

David expanded his skills and knowledge studying at the West Coast with Haida and Salish artists. He has become an accomplished artist who has added strength and vibrancy to the collective voice of First Nations artists. His accomplishments include being the winner of the 2012 BC Achievement Awards in Aboriginal Art. His famous work can be found in public art collections such as UBC Okanagan Campus and the Kelowna Airport.

With an ever-evolving creative path, David’s latest projects include a children’s publication, and creating new pictographs for his language. In the future, he would like to create a mural of picto-tiles for schools.

David’s collection will also be joined by art from local First Nation and Metis Artists with the show running from from June 1st to 30th. 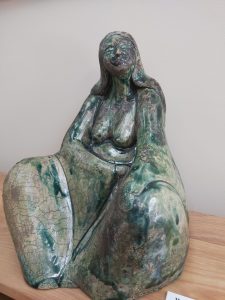